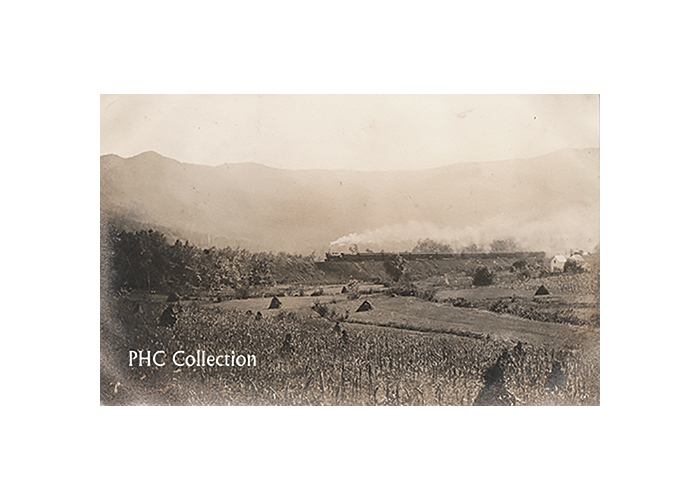 As I was looking at post cards in the Presbyterian Heritage Center years ago, I came upon several real photo postcards of Montreat scenes with initials – AMD – presumably the photographer. A photo historian, I searched the published records and found this entry in the North Carolina Archives: “Alice Margaret Dickinson. active 1908, in unidentified location.” Both the Library of Congress and the UNC Chapel Hill Library & Archives had a single image each.

Post card collectors Joe and Mary Standaert also had run across similar post cards. A collaboration was created to do a small display on this little-known woman.

We eventually found about 60 authenticated photos taken by her in this Western North Carolina region from 1906 – 1929. You can learn more about Alice Margaret Dickinson and see some of her works and read our PDF brochure on her, by clicking here. https://www.phcmontreat.org/photoalbum-AMD.html

As Dalia Linssen at the Rhode Island School of Design observed: “Simplified photographic processes, including dry-plate printing and smaller mechanisms like the George Eastman Company’s 1888 Kodak camera, eliminated the need for cumbersome equipment and darkroom processing. Through its signature ‘Kodak Girl,’ the Eastman Company encouraged thousands of women to take up photography between 1890 and 1900, thereby laying the groundwork for a legacy of talented women in art photography and photojournalism.”

Alice Margaret Dickinson was born on Aug. 31, 1877 in Lowell, Massachusetts.  She and her two siblings, Francis and Helen, were descended from Dickinsons who settled in New England by 1637.  They were first cousins (once removed) of poet Emily Dickinson (1830-1886) from Amherst, Massachusetts.  Their great grandfather, Deacon Samuel Dickinson, founded Amherst College.

Alice Margaret Dickinson was most active in Montreat and the Swannanoa Valley in the years 1906 to 1929. Self-described as an artistic photographer, her subject matter included general scenic views of Montreat, the Swannanoa Valley and its features, as well as homes and people. Most of the images were produced and sold as post card, copyrighted images.

For years, environmentalists tried to get Congress to authorize purchase of mainly cutover lands for establishing eastern seaboard National Forests. This was finally done in March 1911 with the passage of the Weeks Act. The first tract officially acquired was the 8,000 acre Curtis Creek Tract in Old Fort in 1912.  Miss Dickinson sent a copy of her 1908 “Rhododendron Series” photo brochure to Stephen B. Weeks, Secretary of the Interior in September 1911. Presumably this was to entice the Secretary to include local lands in the Weeks Act purchases. The brochure was called “Views of Montreat: Where the Rhododendron Grows.”

There’s always more research to be done to get the full picture. Let us know if you have any additional information or photos.

This site uses Akismet to reduce spam. Learn how your comment data is processed.